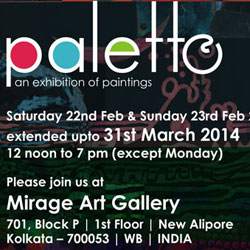 PALETTE - an exhibition of paintings - was held on 22nd & 23rd February, 2014 at Tollygunge Club. The show was carried forward at Mirage Art Gallery and the paintings were exhibited upto 31st March 2014. 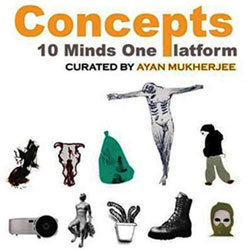 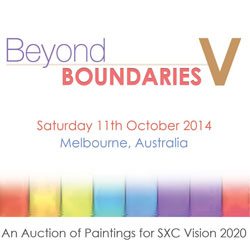 BEYOND BOUNDARIES V - the tenth show of Mirage Art Gallery, was organized in association with St. Xavier's College. It was an Exhibition / Auction of paintings for SXC Vision 2020 at Melbourne, Australia on 11th Octoder, 2014. The morning session was held at Hotel Pullman Melbourne Albert Park, while the evening session took place at the D' Olive Receptions, both in Melbourne, Australia. 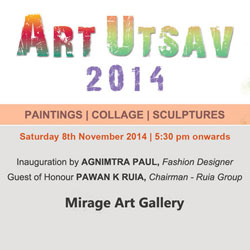 The second Annual Art Utsav of Mirage Art Gallery - ART UTSAV 2014, an exhibition of Paintings, Collage and Sculptures was held from 8th November till 21st December, 2014. The show was inaugurated by renowned Fashion Designer Agnimitra Paul, while the Guest of Honor was Pawan K. Ruia - Chairman of Ruia Group. 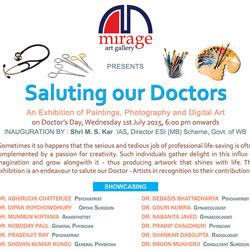 The twelveth exhibition of Mirage Art Gallery was a salutation to our Doctors. The show featured 15 eminent doctors, who also happen to be well known artists, participating with a total of 58 artworks. Preview of the exhibition was held on 1st July and continued till 12th July, 2015.

The exhibit's intent was to expand the canvas and showcase emerging brands and encourage people to hone their creative skills further. The paintings stood out in their variation of style, colour and content. The creations crystallized through oil, acrylic, water colours, mixed media, digital art and photography reached out from the bottom of their hearts. 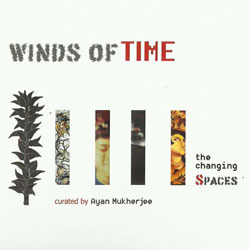 Winds of Time - the Changing Spaces

Curated by Ayan Mukherjee, this show began with a Preview on 26th September and continued till 17th Oct 2015. This is what Ayan has to say about the show...

"We, human beings, how do we describe our existence? Well, human body can best be deﬁned as a concrete structure consisting of different emotions, judgments, thoughts and much more than this. Let's put it straight in this way that we, human beings are moreover an entirety of different spaces, aspects, a togetherness of various feelings. Being a part of the art fraternity and associated with different art exhibitions and art projects I have been fortunate enough to work with senior contemporary artists of Bengal.
Ever since the idea of this show has cropped up in my mind, I had the desire of using art works and creative inputs of ADITYA BASAK, ATIN BASAK, CHANDRA BHAITACHARJEE, DEBNATH BAS, JAYASHREE CHAKRAVARTY AND PRASANTA SAHU. I always had the belief that these creative minds would do apt justification to the concept and ideas the show is all about. The display of art works by these renowned artists elucidates the very title and theme of the show." 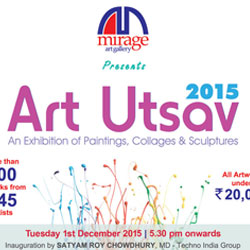 ART UTSAV 2015 - an exhibition of Paintings, Collage and Sculptures – the third Annual Art Utsav of Mirage Art Gallery was held from 1st December to 10th January, 2015 at the gallery premises. The show was inaugurated by Satyam Roy Chowdhury - MD, Techno India Group, while the Guest of Honor was Dr. Anjan Siotia - Consultant Interventional Cardiologist. The show was supported by Sandip Somani (as President, IHRO, Kolkata).